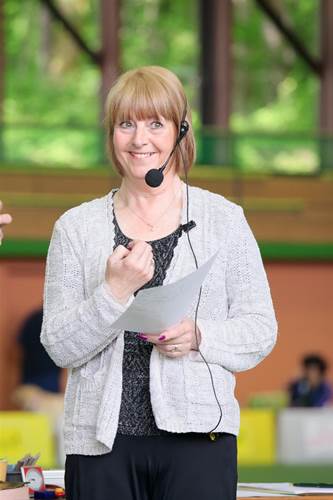 Kath currently owns four dogs – 1 x Crossbreed, 2 x Border Collies  1 x Hungarian Pumi. She got involved in the sport in 1996 at The first Demonstration of Heelwork to Music, held at Ryton On Dunsmore – as a spectator to start with, then first competed in 1999.

Kath's has three biggest and most memorable successes.

I have had more successes with other dogs, including Ginnie my first 'HTM DOG'.
She was my most successful competing dog in the early years, suffered from epilepsy from 18 months, but competed throughout her life finishing First Equal in HTM at Crufts in 2005 at the age of 13 yrs old.

I have been successfully competing with my dogs in Heelwork to Music since 1999 and with these dogs, I have been entertaining the crowds at Crufts nearly every year since 2001.

Heelwork To Music is a huge part of my life, keeping me very busy helping with the development of the sport, as a member of The Kennel Club, The KC Judges Working Party and The KC HTM Working Party along with being a founder member and Competition Organiser of a nationwide KC Registered HTM Club, Canine Freestyle GB which holds two successful and popular weekend shows each year.

In March 2008 at CRUFTS, I competed with my Crossbreed Spice and won The Freestyle final and then a couple of days later we went on to represent England in The International Freestyle Final which we are very happy to say we won.

Following this, in October 2011 and September 2013, I was again selected with Spice and Amber to represent Great Britain at the Open European Championships in both Freestyle and Heelwork to Music.
And we were also selected for Team GB in 2014 where I competed with three of my dogs, Spice, Amber and Denby and The HTM Team were placed second. Our biggest Team achievement was winning the Gold Team Medal in Belgium in 2017 for both Heelwork To Music and Freestyle.
A very proud moment and a lap of honour given to us at Crufts 23018 to mark this achievement!

I have also been honoured to judge the HTM and Freestyle Competitions at Crufts twice, the first time in 2006, my second appointment was in 2012 and I have accepted an invitation to judge Crufts for a third time in 2020.. I have also judged at the Open European Championship in The Czech Republic in 2012 and at the World Dog Show in Finland in August 2014.

I have contacted all the handlers selected for HTM TEAM GB and they are all honoured to have been chosen and very excited at the prospect of representing Great Britain in Switzerland at the Open European Championships 2018.
I am also extremely proud and lucky to be asked to lead such a strongly talented group of highly motivated individuals.